(Implementation hiding) * Core concept in all of computer science. * Without abstraction, we would still be programming in machine code or worse not have computers * Give names to things, so that the name captures the core of what a function or a whole program does. * Used to hide internal details and show only functionalities. * e.g : Any Verb

(Information hiding) * Is a characteristic to bind data members and functions in single unit. * Is packing of data and functions operating on that data into a single component and restricting the access to some of the objects components. * Is a mechanism which represent the essential features without including implementation details. * e.g : Any Noun

Difference between Abstraction and Encapsulation:# 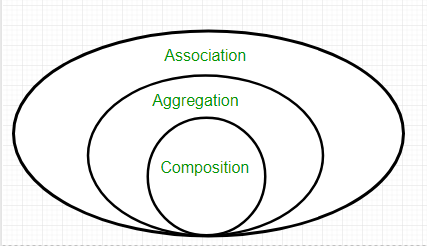 Methods of metaclass to create & initialize a class are:

TODO: - confusion in magic method call orders - how a class instance are created - as a class is object of a metaclass

Concept: * A class with all the methods abstract * Contains Methods signature * Do not contain definition/method body * Constant variables (which must be Static + Final in other langs.) - in python there is no final or const keyword * Cannot instantiated * Behaviour/methods which must be implemented by classes * Class which implement interface should implement all the methods OR be an abstract class

Some famous magic methods / internal methods of a class

TODO - Issue with __del__; not explained in python doc

Note: In Python 3.x, the notion of Unbound Method has been dropped and we treat it as Simple Function.